Lutz Eckstein, professor at Karlstad University, together with Yves Klinger, David Horlemann, Annette Otte and Kristin Ludewig recently published the paper Germination of the invasive legume Lupinus polyphyllus depends on cutting date and seed morphology in the journal NeoBiota. The paper is accessible open access on the journal website, or you can read a summary of the paper below:

In semi-natural grasslands, mowing leads to the dispersal of species that have viable seeds at the right time. For invasive plant species in grasslands, dispersal by mowing should be avoided, and information on the effect of cutting date on the germination of invasive species is needed. We investigated the germination of seeds of the invasive legume Lupinus polyphyllus Lindl. depending on the cutting date. We measured seed traits associated with successful germination that can be assessed by managers for an improved timing of control measures. Germination patterns were highly asynchronous and differed between seeds cut at different dates. Seeds cut early, being green and soft, tended to germinate in autumn. Seeds cut late, being dark and hard, were more prone to germinate the following spring, after winter stratification. This allows the species to utilize germination niches throughout the year, indicating a bet-hedging strategy.

Seed color and the percentage of hard seeds were good predictors of germination percentage. Managers should prevent the species from producing black and hard seeds, while cutting plants carrying green and soft seeds appears less problematic. Furthermore, germination patterns differed between experiments in climate chambers and in the common garden, mainly because germination of dormant seeds was lower in climate chambers. We propose that more germination experiments under ambient weather conditions should be done, as they can give valuable information on the germination dynamics of invasive species. 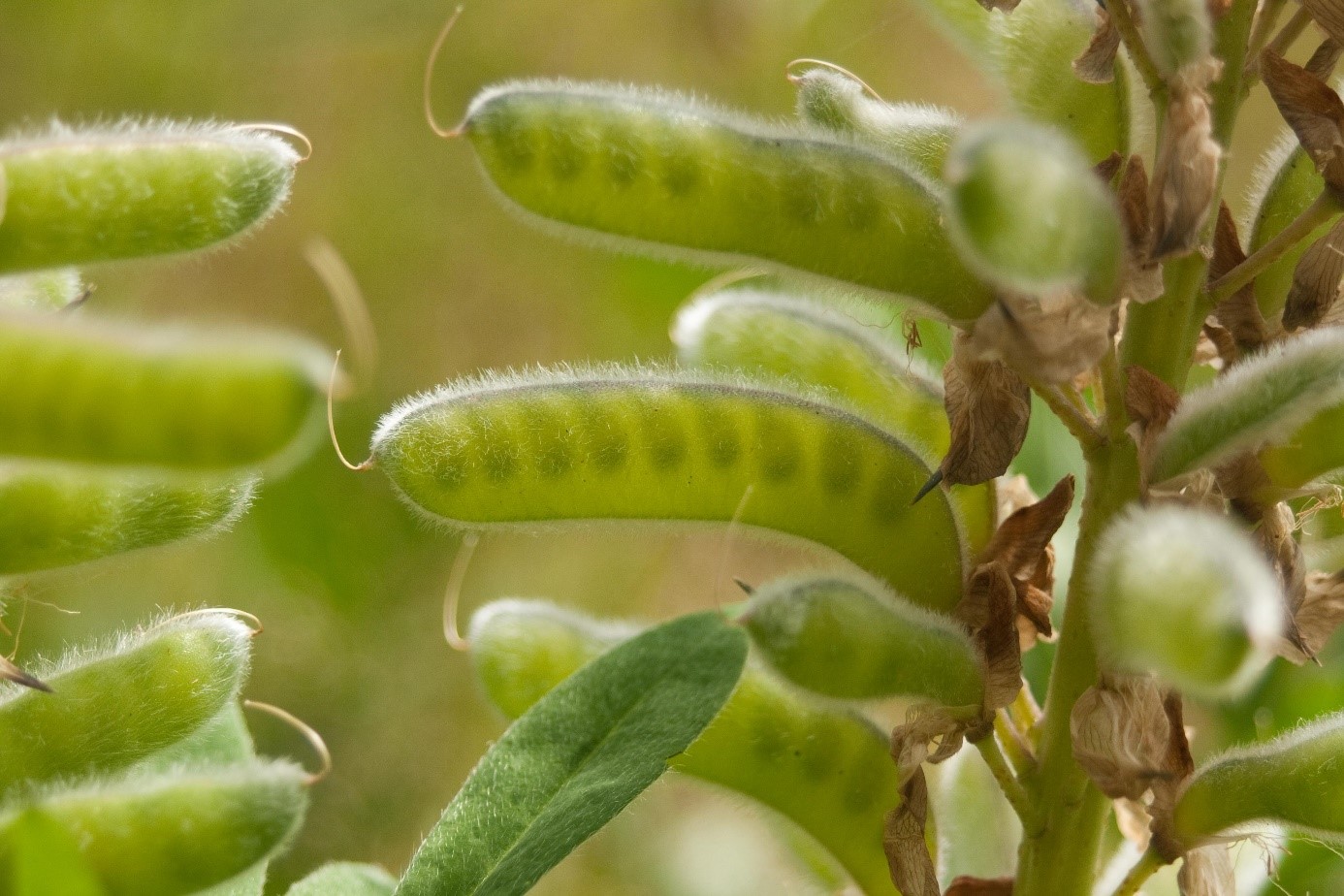 Sampling fish in the Segura River

Earlier in the autumn I visited the fish passage project ”Segura Riverlink” in the Segura River, Spain. While in Murcia I also visited researchers at Universidad de Murcia who are involved in studying effects of the newly constructed fishways on the local fishes. I joined Francisco Oliva Paterna, Ana Sanchez Perez and Juan Franco Galera to sample fish in areas affected by the migration obstacles and the new fishways, both in the Segura River and in a tributary. They are sampling fish in affected river stretches before and after the construction of the fishways to study potential changes in species composition and fish distribution. During my visit we sampled fish using electrofishing and minnow traps. The Andalusian barbel (Luciobarbus sclateri) is the star of the Segura Riverlink project and was caught in high numbers. Exotic species are abundant in the Segura River. By electrofishing, we sampled plenty of Iberian gudgeon (Gobio lozanoi) and Iberian nase (Pseudochondrostoma polylepis), both species native to Spain but most likely introduced by humans to the Segura River basin. Other exotic species caught were pumpkinseed (Lepomis gibbosus), northern pike (Esox lucio), common bleak (Alburnus alburnus) and common carp (Cyprinus carpio). The minnow traps were used in the smaller tributary. Here we caught principally Iberian gudgeon and Andalusian barbel but also a couple of Mediterranean turtles (Mauremys leprosa). It was an interesting and pleasant visit. I wish the group good luck in their future work and hope to return. 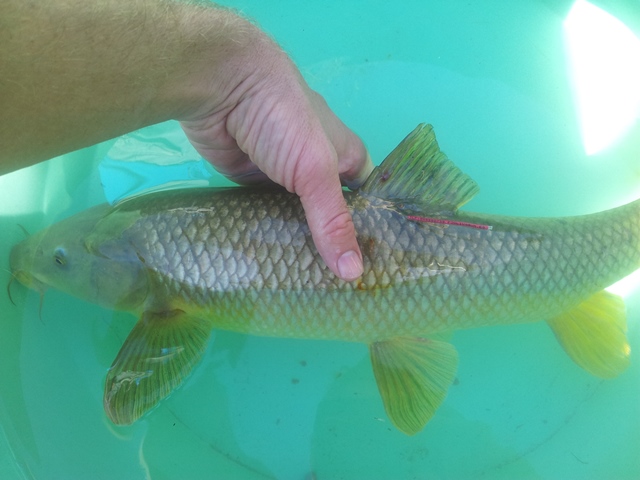 An Andalusian barbel tagged with an external mechanical tag with a unique ID-number. Future recaptures of this individual fish will result in information of its movement and growth. 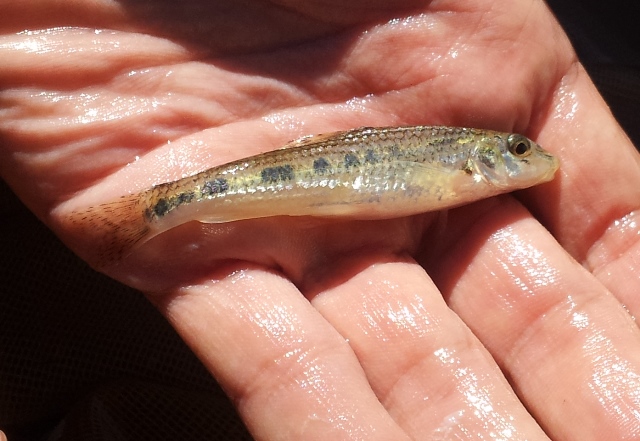 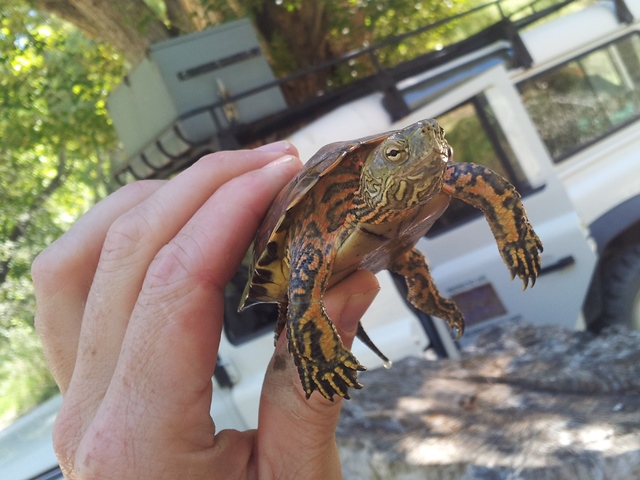 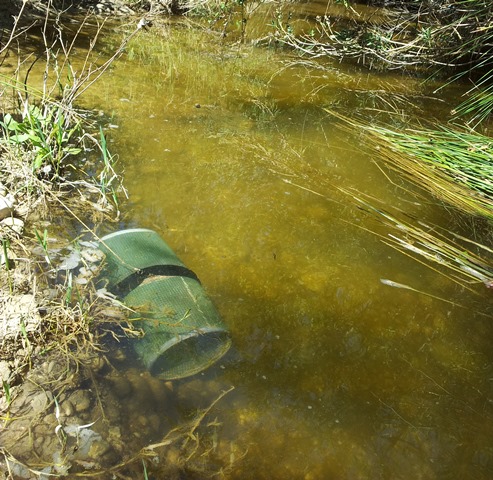 A minnow trap in the tributary.

The golden mussel (Limnoperna fortunei) has invaded rivers in South America. The mussel, like many invasive species, has few natural enemies and reproduce rapidly. Below is a YouTube-video with information about the mussel and its ecological effects. The video is part of a crowdfunding project from the Laboratório de Biologia Molecular Ambiental BioMA, with the aim to sequence the mussels DNA to better understand the organism. 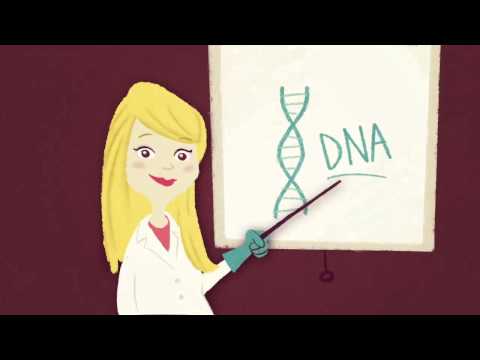 Read more about the golden mussel and the sequencing of its DNA here.