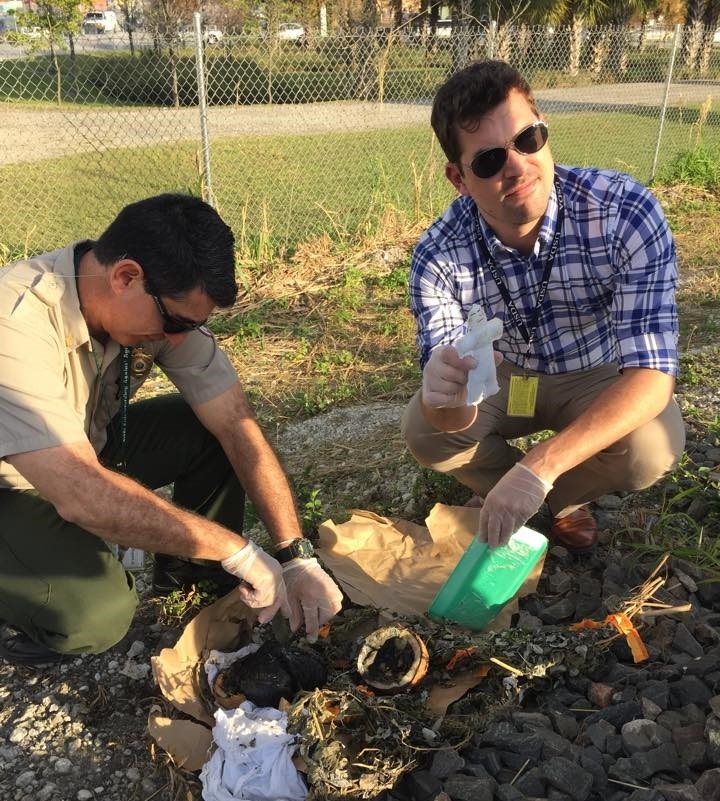 Jeff (right) and a former colleague inspecting Santeria sacrifices in Miami, Florida, USA. Santeria worshipers use a variety of plants, herbs, and animals to perform religious sacrifices. Some hypothesize that the very invasive African land snail (Achatina fulica) was brought into the United States to use in these rituals. Photo by Kelsey Branch

“Hej and hello, my name is Jeff Marker and I am a PhD student here at Karlstad University in the NRRV Research Group. Originally hailing from the Great Plains region of the United States, I am now settled here in Sweden working on riparian ecology, food webs, spider predation, and forestry policy. I began my academic career focused on tropical plant science questions, specifically the best ways to grow and maintain a year round seed corn nursery in Hawaii. After a short stretch in the agribusiness industry, I turned my attention to invasive pests and plant disease monitoring with the United States Department of Agriculture.  As a Plant Protection and Quarantine Officer I was tasked with enforcing USDA quarantine laws related to invasive species, agricultural smuggling, and agricultural trade compliance. It was here that I rediscovered my love of insects, especially the beetles. Over the years I amassed a large working and personal collection of beetles from the Cerambycidae and Buprestidae families from the Midwest and Great Plains regions of the U.S. Eventually I left the beetles behind, put on a suit and tie, and ended up in Washington D.C. as an agricultural policy analyst where I focused on international quarantine regulations and the agricultural quarantine inspection process.

After meeting a wonderful Swedish woman and taking stock of my life, I was easily convinced to move to Gothenburg in 2016. Upon moving to Sweden, I restarted my graduate education and completed my MSc here at KAU through the Ecology and Conservation Biology Program. My thesis focused on the effects of urban areas on Swedish beetles that utilize dead or decaying wood for all or part of their life cycle. I believe that urban areas have a mixed, but often overlooked, effect on insect biodiversity. On one hand increased urbanization and a focus on specific types of habitat removal (i.e. dead or decaying wood) can be a direct threat to ecosystem health and/or function. However, urban areas often have significantly more plant and arthropod diversity when compared to the surrounding natural, managed, and rural landscapes. And while urban areas can be prone to invasive pest outbreaks and poor management decisions, with proper care and monitoring they also have potential to become biodiversity hotspots and some of the most resilient ecosystems in the face of a changing climate and changing attitudes about nature. 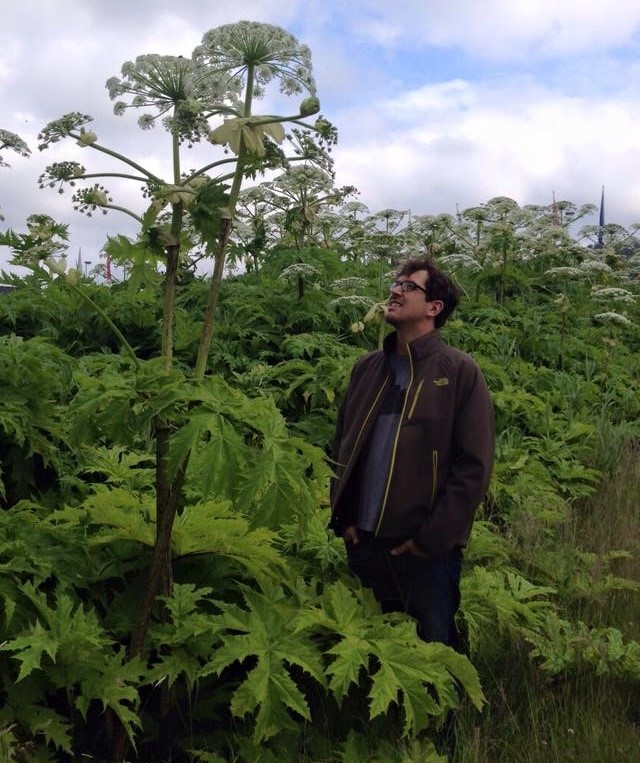 Jeff in Gothenburg admiring some giant hogweed/jätteloka (Heracleum mantegazzianum), a European and North American invasive species with the potential to cause a severe phototoxic effect on human skin. Photo by Johanna Jonstrand

As a researcher at KAU I will combine my love of arthropods and my background in public policy to analyze forestry management practices and their effects on riparian ecosystems. While here I hope to share my knowledge about insects and agriculture but more importantly, I am excited to learn about spiders and cutting edge genetic techniques including stable isotope analysis and DNA-barcoding. Under the supervision of Eva Bergman, Lutz Eckstein, Ann Erlandsson, Rachel Bowes, and Denis Lafage I will carry out a range of experiments to examine the link between riparian forest buffer width and its effect on predator community functional diversity, riparian ecosystem function, and food web complexity.  Currently I am conducting feeding experiments on wolf spiders (Lycosidae) to determine the time that specific prey DNA is detectable in their guts after predation events. This lab experiment will act as a primer for our future field studies in the Värmland and Örebro areas that will include intensive ecosystem sampling of terrestrial and aquatic communities. Our project will collaborate closely with forestry stakeholders, Swedish country administrative boards, Skogsstyrelsen, and other scientists involved in similar work. Ultimately we will work with these same groups to craft riparian buffer strip guidelines that intersect the needs of Swedish forestry with the health of Swedish riparian ecosystems to help build on sustainable forestry concepts.

Outside of the research arena I spend my time teaching my daughter to love and respect all the småkryp and playing and collecting board games. If you ever want to talk beetles or board games feel free to swing by my KAU office any time. You can follow my research and occasional musing on Instagram or Twitter both @sverige_saps.” 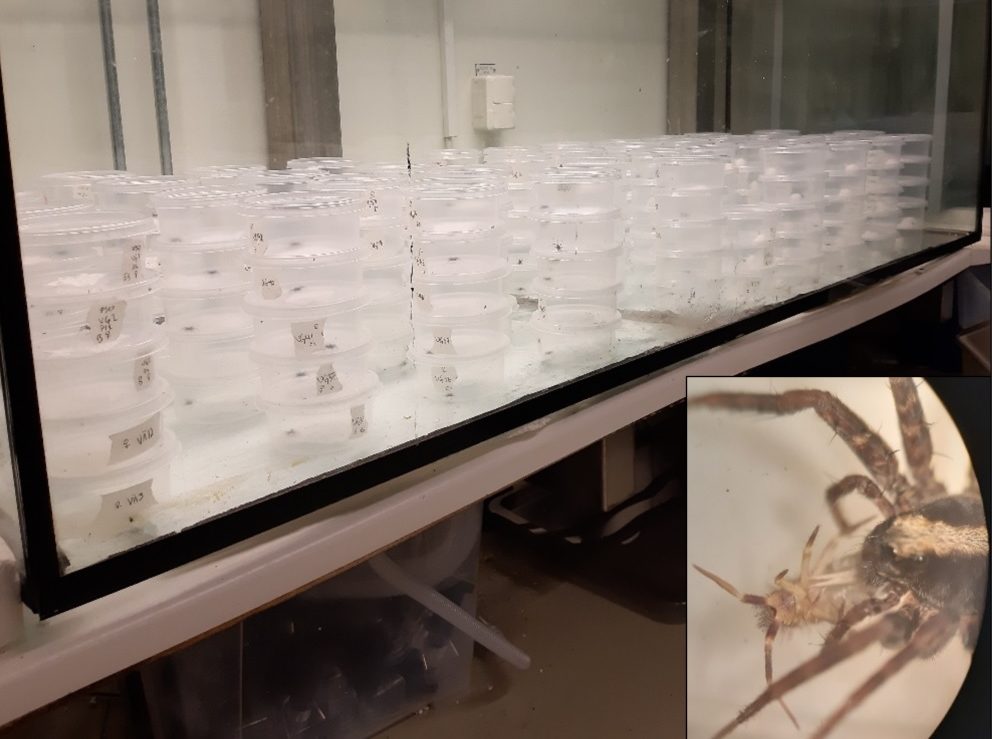