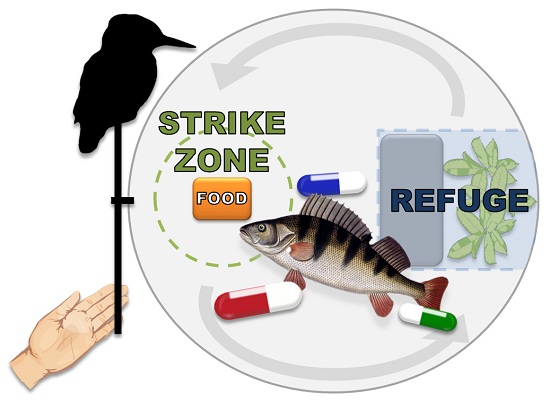 Graphic summary of the experiment. From the paper.

The paper “Assessing Potential Vulnerability and Response of Fish to Simulated Avian Predation after Exposure to Psychotropic Pharmaceuticals” by Melanie Hedgespeth, Anders Nilsson and Olof Berglund was recently published in the scientific journal Toxic. All three authors are associated with Lund University but Anders Nilsson is also a professor at Karlstad University. In the abstract the authors write:

“Psychotropic pharmaceuticals present in the environment may impact organisms both directly and via interaction strengths with other organisms, including predators; therefore, this study examined the potential effects of pharmaceuticals on behavioral responses of fish to avian predators. Wild-caught juvenile perch (Perca fluviatilis) were assayed using a striking bird model after a seven-day exposure to psychotropic pharmaceuticals (the antidepressants fluoxetine or sertraline, or the β-blocker propranolol) under the hypotheses that exposure would increase vulnerability to avian predation via increasing the probability of predator encounter as well as degrading evasive behaviors upon encounter. None of the substances significantly affected swimming activity of the fish, nor did they increase vulnerability by affecting encounter probability or evasive endpoints compared to control treatments. Counter to our expectations, fish exposed to 100 μg/L fluoxetine (but no other concentrations or pharmaceuticals) were less likely to enter the open area of the arena, i.e., less likely to engage in risky behavior that could lead to predator encounters. Additionally, all fish exposed to environmentally relevant, low concentrations of sertraline (0.12 μg/L) and propranolol (0.1 μg/L) sought refuge after the simulated attack. Our unexpected results warrant further research as they have interesting implications on how these psychotropic pharmaceuticals may affect predator-prey interactions spanning the terrestrial-aquatic interface.”

Conference: Restoring floodplains, habitats and connectivity using mussels and brains
Film: The Lost Fish – The Struggle to Save Pacific Lamprey