Brown trout in an altered climate – early environmental effects on behavior and growth?

Larry Greenberg is currently working on a research project on potential effects of increased winter temperature on brown trout growth and behavior. The research is funded by Karlstad University’s Lecturers and Professors Research Award. Larry describes the project:

“The predicted climate change over the next 65 years will have a major impact on the Earth’s plants and animals. Climate scenarios for Sweden predict that mean annual temperature will increase by 3-5 ° C, with a greater increase in winter than in summer. Because incubation of eggs laid by brown trout and related fishes occurs during winter, the predicted increased winter temperatures may have a major impact on egg development, with far-reaching consequences for fish after they have hatched. The fact that environmental conditions during the egg stage can affect later life stages (juveniles and adults) may seem unlikely, but recent studies have already shown that temperature conditions during egg development can affect growth of juveniles and even reproductive output of adults. As embryonic temperature conditions have been shown to affect growth, one would also expect such conditions to even affect behavior, as behavior and growth are often linked.

For this project, I plan to investigate how an increase in winter temperature conditions during egg development affects the behavior and growth of juvenile brown trout. I will raise fertilized brown trout eggs over the winter at ambient temperature and at 5° C warmer water, and test for subsequent effects on the feeding behavior and personality of juveniles as well as on their growth and metabolic rates.  The research is novel by being the first to investigate whether or not thermal conditions during egg development can affect both the behavior and growth of juveniles.”

The eggs are presently developing under different temperature regimes at Gammelkroppa fish hatchery. 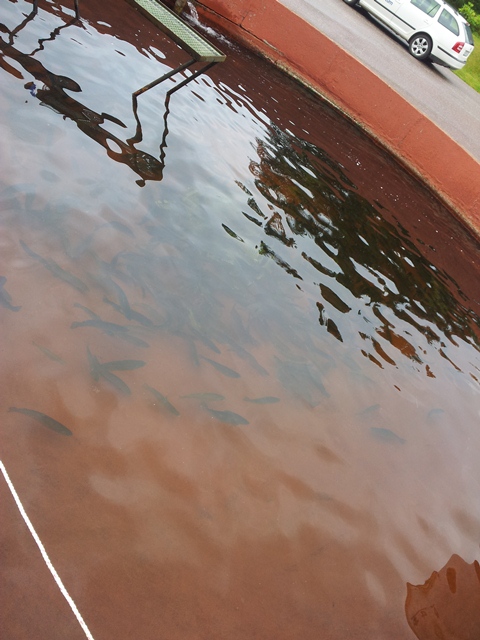