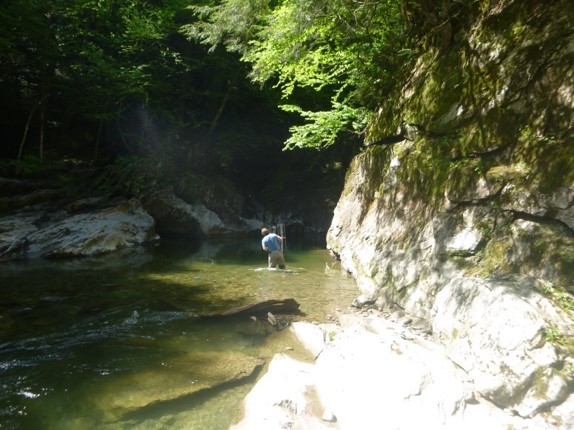 Tracking smolts in Huntington River, a tributary to Winooski River.

In the abstract the authors write: “The purpose of this study was to investigate behavior and survival of radio-tagged wild- and hatchery-reared landlocked Atlantic salmon smolts as they migrated past three hydropower dams equipped with fish bypass solutions in the Winooski River, Vermont, USA. Among hatchery-released smolts, those released early were more likely to initiate migration and did so after less delay than those released late. Once migration was initiated, however, the late-released hatchery smolts migrated at greater speeds. Throughout the river system hatchery released fish performed similarly to wild fish. Dam passage rates varied between the three dams and was highest at the dam where unusually high spill levels occurred throughout the study period. Of the 50 fish that did migrate downstream, only 10% managed to reach the lake. Migration success was low despite the presence of bypass solutions, underscoring the need for evaluations of remedial measures; simply constructing a fishway is not synonymous with providing fish passage.”