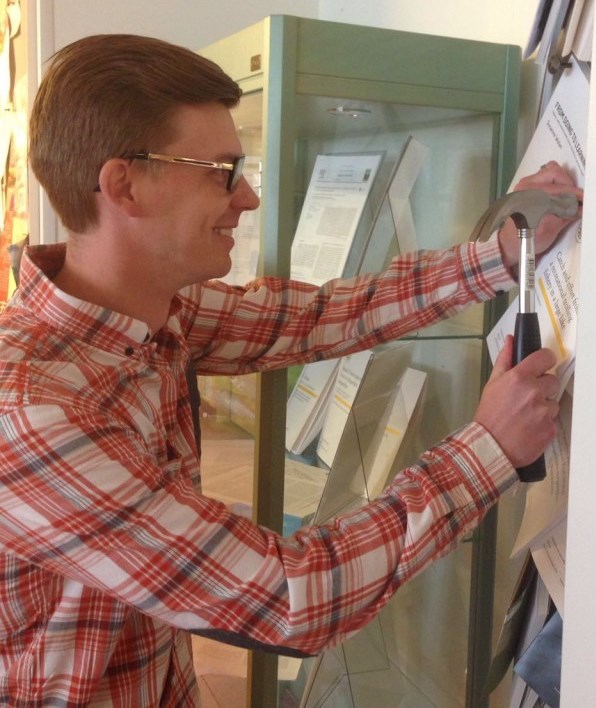 Anders Andersson will defend his licentiate thesis on June 9, at 10:15 in Room 9C203 at Karlstad University.

For over two years Anders Andersson, PhD-student at Karlstad University, has been researching the catch and effort from the recreational fishery in Lake Vänern  the largest lake in the European Union. His research has focused on landlocked Atlantic Salmon and migratory brown trout. In accordance with tradition, Anders two weeks ago nailed his licentiate thesis on a wall at the university. On June 9, he will defend his thesis “Catch and effort from a recreational trolling fishery in a large lake” . Opponent will be Ian Cowx from the University of Hull, United Kingdom and the defence will take place at 10:15 in Room 9C203 at Karlstad University.

In the abstract of the thesis, Anders writes:

“Over recent decades recreational fisheries have grown substantially throughout the world. Despite this increase, catches from recreational fisheries have often been ignored in fisheries management, although this is now being remedied. Monitoring recreational fisheries can be expensive, and the primary means used for monitoring is angler (creel) surveys, typically funded from sales of fishing licences. The studies presented in this thesis examine different approaches to monitoring recreational trolling fisheries’ catch and effort, where fishing licenses are not required and there are no reporting requirements. I present results from a complemented roving/mail-in survey undertaken during 2013-2014 to estimate recreational effort and catch of Atlantic salmon (Salmo salar) and brown trout (S. trutta) in the largest lake in the European Union, Lake Vänern, Sweden. I also evaluate different angler catch reporting methods (mail-in, tournament reports and face-to-face interviews) and compare catch rates within and among spring and fall fishing periods. In addition, mail-in survey data are examined for recall bias.

I estimate that 28.7 tonnes of salmon and trout combined were harvested by the recreational trolling fishery in 2014, more than the commercial and subsistence fisheries combined. Seasonal differences in both recreational effort and catch were observed. Effort, in boat hours, was significantly higher in spring than in fall. Catch rates of trout were higher in fall than in spring, but there were no seasonal differences in catches of salmon. Harvest per boat day did not differ significantly among catch reporting methods, indicating that all three methods could be useful for managers interested in harvest rates. In contrast, total and released catch per boat day differed among reporting methods, with tournament anglers catching more fish in total. Finally, there was little evidence for recall bias in mail-in surveys, indicating that mail-in surveys are useful for collecting unbiased catch data. My study is the most comprehensive angler survey to date for Lake Vänern, and my results should be of immediate use to local fisheries managers and should also be of interest to researchers and managers interested in estimating catch and effort for fisheries at large spatial scales.”

Paper: Ice cover affects the growth of a stream-dwelling fish
Laxvandring i Dalälven