“Upstream migration by adult salmonids is impeded by dams in many regulated rivers, as is the case for landlocked Atlantic salmon, Salmo salar, in the River Klarälven, Sweden. There, the salmon cannot reach the spawning grounds due to the presence of eight dams. Hence, hatchery-reared smolts are released downstream of the dams, and upstream migrating spawners are caught in a trap at the lowermost dam before transported by truck to the spawning grounds past the dams. To identify the spawning grounds and compare the behavior of wild and hatchery-reared Atlantic salmon during upstream migration and spawning, 34 wild and 28 hatchery-reared, radio-tagged Atlantic salmon were followed during their spawning migration from August to October 2011. Half (50%) of the hatchery fish, but only 11,8% of the wild fish ended up as fallbacks, i.e. they migrated past the first downstream power station, and did not spawn. A significantly higher proportion (21.4%) of hatchery- reared salmon moved in an erratic way, with several up and down stream movements, when compared to the wild salmon (5.9%). When looking at the salmon that stayed in the river (exc. fallbacks), wild individuals exhibited a holding behavior (little or no movements before presumed spawning) more often (86.7%) than the reared ones (50%). The wild salmon also held position (and presumably spawned) for longer time (25.4 days) than the reared salmon (16.1 days). Reared salmon held position, on average, 10 km further upstream than wild salmon, passing the presumed best-quality spawning habitat. The migration speed (average 17.4 km/day) between two logger stations did not differ between wild and reared fish or between sexes. Our results suggest that the reproductive success of hatchery-reared Atlantic salmon is relatively low and their capacity as supplementary spawners to the wild population in the Klarälven, is probably small.”

How do you entertain a fish? 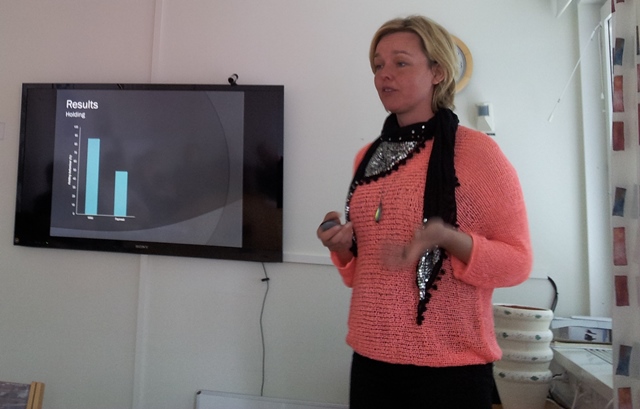