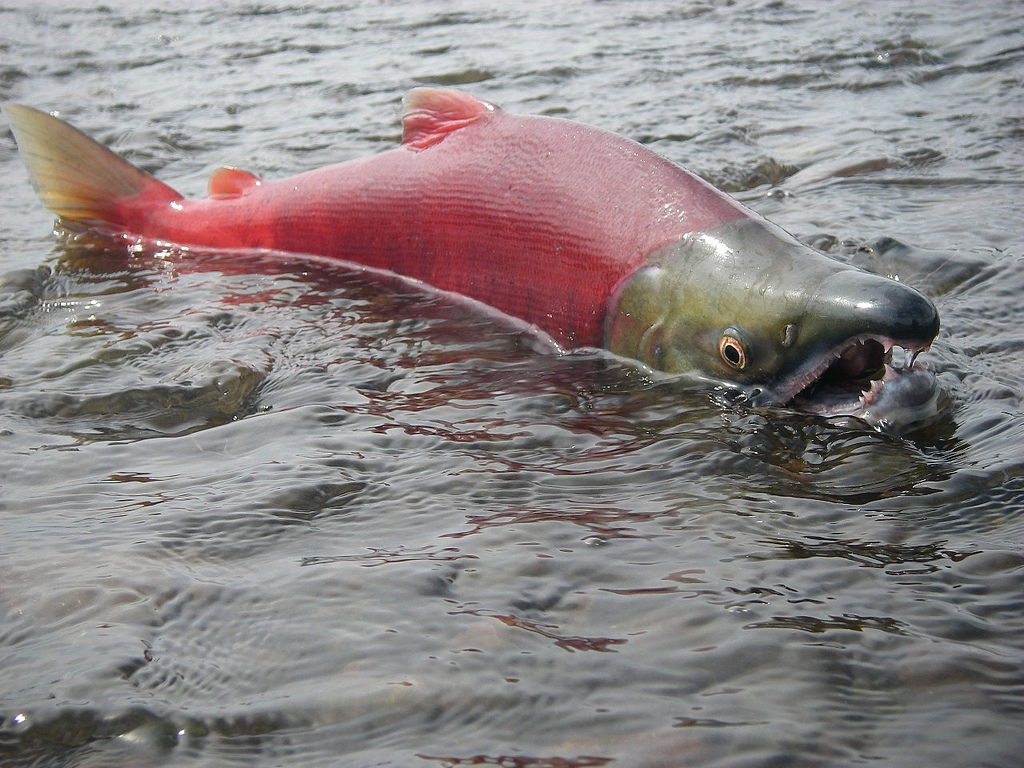 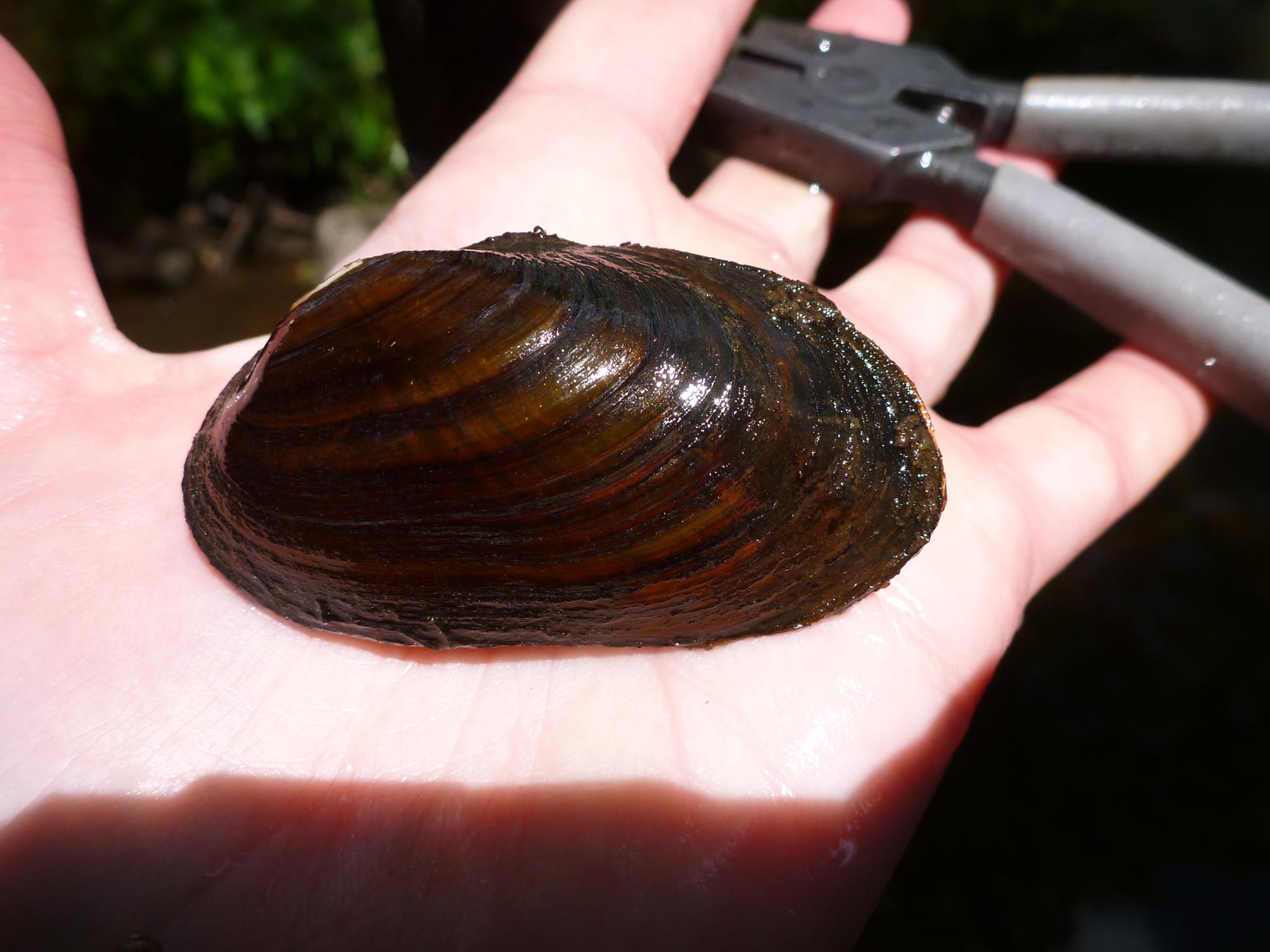 NRRV is looking for a part-time project assistant to work with the endangered thick-shelled river mussel (Unio crassus). The project concerns rearing of juvenile mussels in the mussel lab in Veberöd, Skåne, and reintroduction of mussels in streams in southern Sweden. Read more and apply for the position here (Swedish). The last day to apply is 2 March 2018.

Although most fieldwork is carried out in warmer seasons, members of the NRRV research group also go out in winter to collect information and samples for their research. Here, Richard Durtsche, visiting professor from Northern Kentucky University, writes about a field excursion that took place last week: 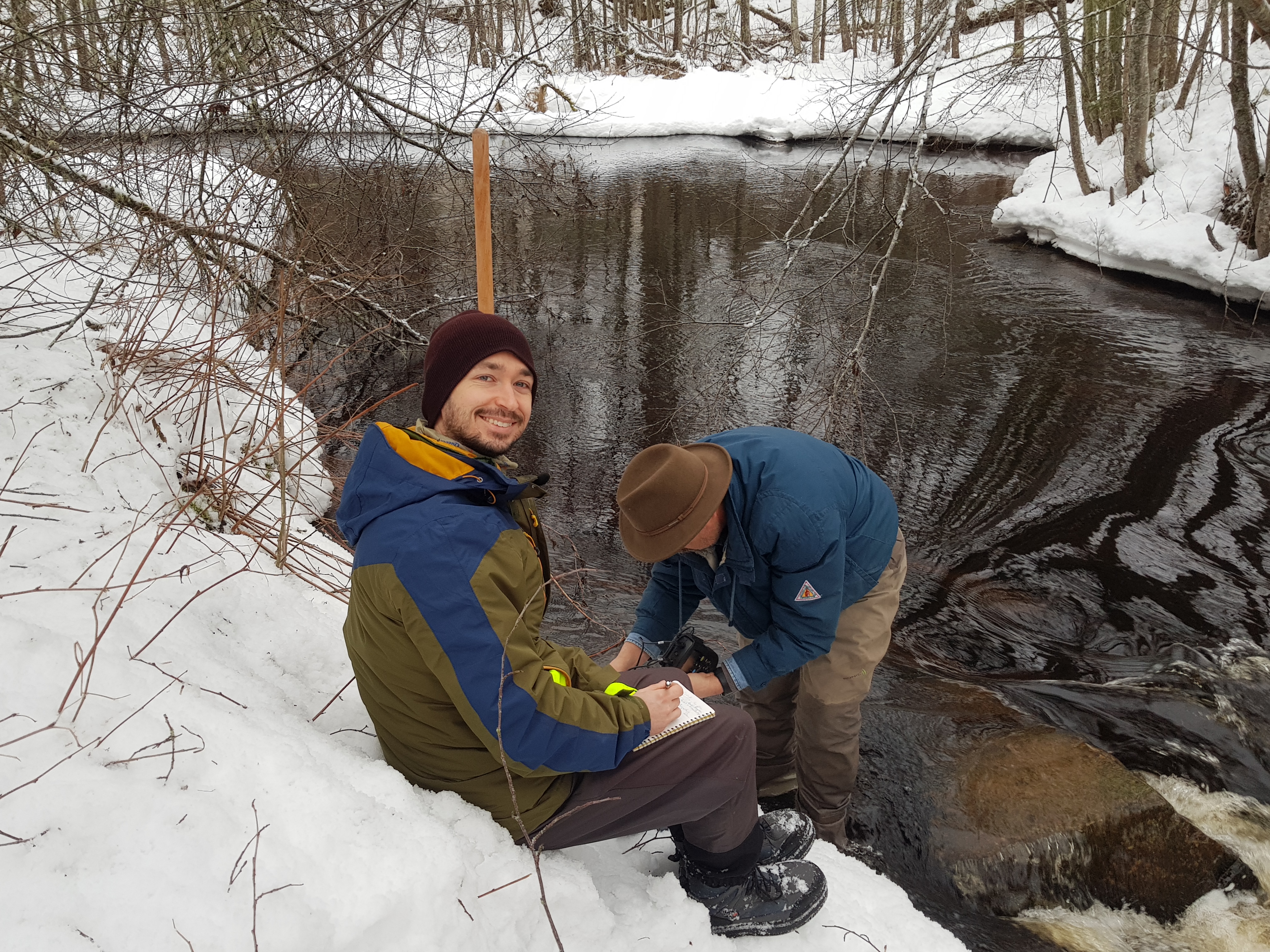 “As part of a study on the energetics in natural food sources available to Salmonid fishes (trout, salmon, grayling, etc.), we have been sampling the macroinvertebrates in streams that connect to the Klarälven (Clear River) this past fall and now this winter. These investigations will focus on an increase in the accuracy of macroinvertebrate body size measurements taken with digital imaging and an increase in the accuracy of dry mass measures using an ultramicrobalance, newly acquired by Kau Biology. Energetic (caloric) content will also be determined for the different macroinvertebrate taxa. The three target macroinvertebrates groups for this study include mayflies (Ephemeroptera), caddisflies (Trichoptera), and stoneflies (Plecoptera). These are major prey items for all life history stages of Salmonid fishes, and are often used as indicators of stream health in aquatic environmental assessment due to their sensitivity to pollutants and anthropogenic impacts. Results of this study will be useful in developing energetic models of fish foraging for management of fish population and river/stream conditions.

The team that braved the cold winter conditions and moderate snow levels on January 29th included: Richard Durtsche (NRRV visiting professor from Northern Kentucky University), Rachel Bowes (NRRV Post-Doc), Andrew Harbicht (NRRV Post-Doc), and Rachel Prokopius (exchange student from Northern Kentucky University). The stream that we were investigating was located just south of Ransäter. The water was flowing rapidly, and we initially decided to check out the stream conditions on the downhill (east) side of highway 62 to look for sampling sites. There was knee deep (or more) snow to ford before coming to forest cover where moving was easier despite many treefalls. As the streamflow was fast and the water level high, there were no safe locations to sample. So we headed west of highway 62, just off the access road. There we found good sampling habitat just downstream of a large pool that ran under a bridge on that road. 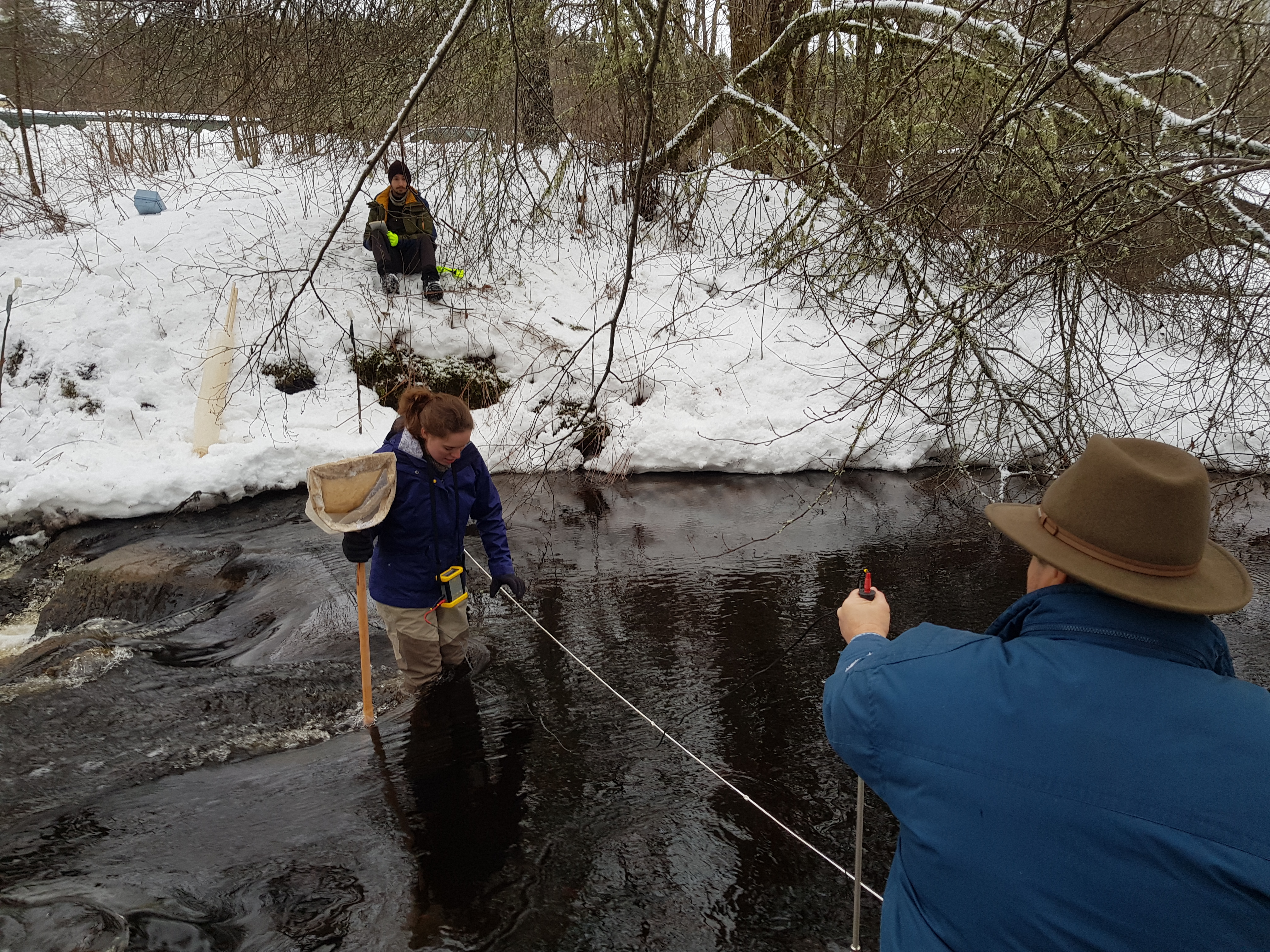 One of the first things we did at waterside, was to collect physicochemical measures of the water conditions. These included: temperature, pH, conductivity, and dissolved oxygen. We also measured the flow volume of water by measuring the width of the stream, and then taking the depth and flow rates every 50 cm across the stream. Water temps of 1.4°C and the tingle of cold penetrating our waders told us that today was not a good day to fall in the water. After we crossed the fast-flowing stream, we found several relatively shallow areas where we could sample invertebrates. We made a series of kick seine samples from different parts of the stream shallows to dislodge and collect invertebrates from the stones and substrate.

It was definitely a group effort to kick stones and stream bottom, brush rocks to knock off invertebrates to be carried with stream flow into the seine, and then wash the samples into a collecting bucket. While we thought we might have limited luck, we in fact did extremely well with collecting a range of macroinvertebrates and large quantities of many of those taxa. There will be a good share of macroinvertebrate sorting and measuring upon return to the laboratory.” 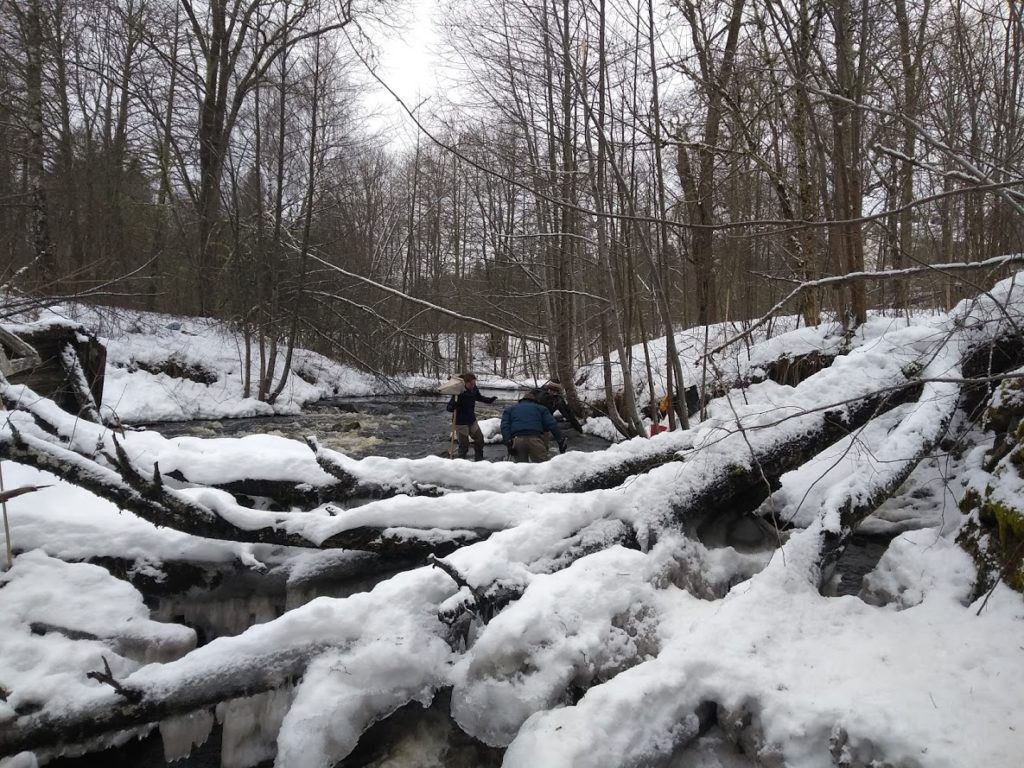 The team at work in the stream. 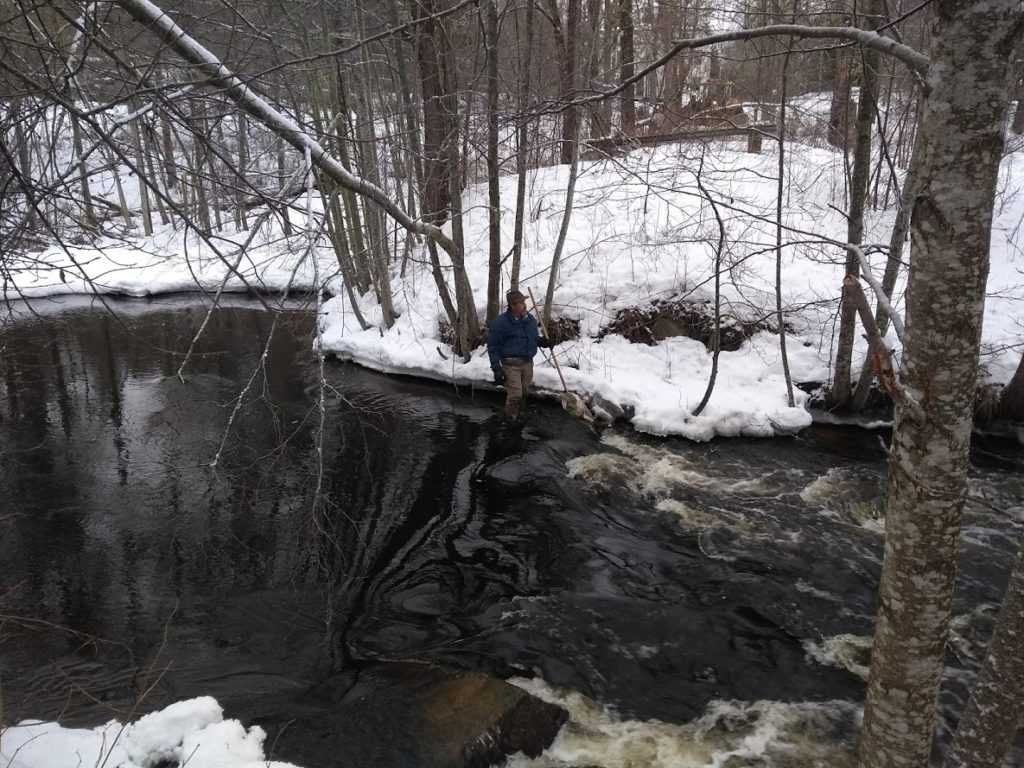 Richard Durtsche at the field site. 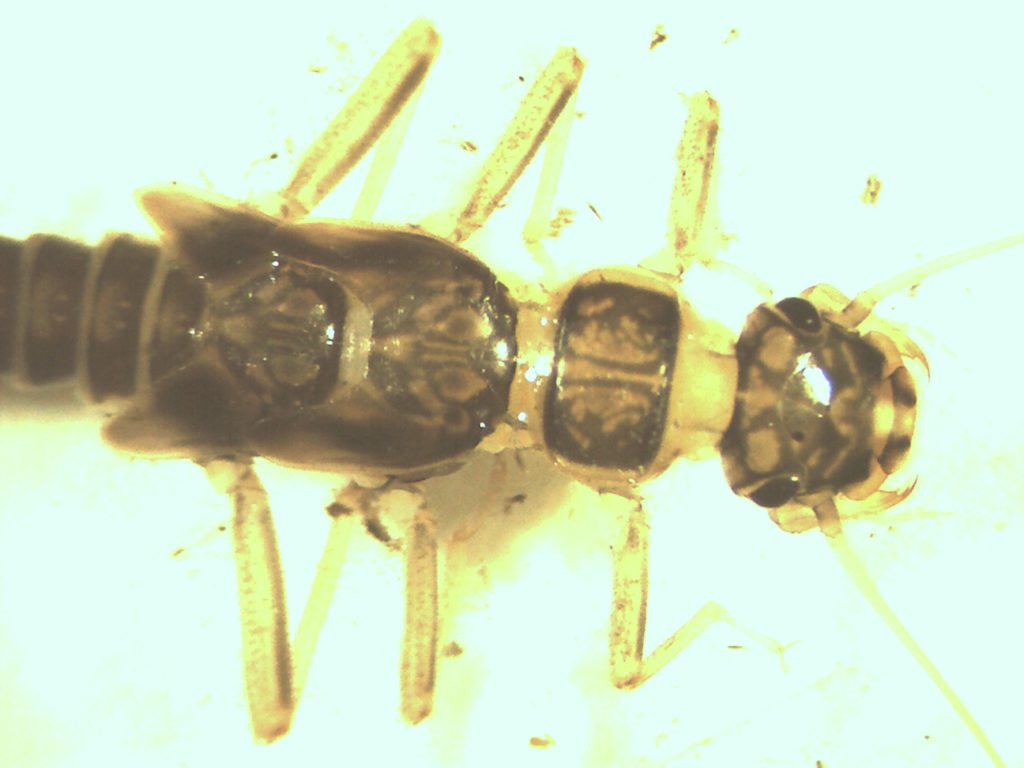